To share your memory on the wall of Kenneth Maggert, sign in using one of the following options:

Receive notifications about information and event scheduling for Kenneth

Consider providing a gift of comfort for the family of Kenneth Maggert by sending flowers.

We encourage you to share your most beloved memories of Kenneth here, so that the family and other loved ones can always see it. You can upload cherished photographs, or share your favorite stories, and can even comment on those shared by others.

Posted Oct 28, 2020 at 08:22pm
I worked with Ken for many year's at Bundy Tubing. He was an awesome guy and would do anything for anybody. My heart break's for his family as well as for Ken GOD BLESS ALL OF YOU.I JUST DON'T KNOW WHAT ELSE TO SAY, I'AM SO VERY SORRY .

Posted Oct 28, 2020 at 08:44am
I am very sad to hear, I won't be seeing one of my regular customers at Meijer gas, of Angola. He would stop nightly on his way to work when I was on 2nd shift. We have had a few conversations in passing through. Found out I had even met his lovely wife and did not know it she helped take care of my new grand baby! I am so sorry for this tragic loss to the family he was a very nice guy and I will miss seeing his smiling face. Prayers for his family!

Posted Oct 27, 2020 at 01:45pm
Sharon and Girls,
I'm at a loss and do not know what to say except for you are in our thoughts and prayers. Ken will be severely missed by all. I know I miss working with and just talking to him every day. I hope you all know that if you need anything all you have to do is ask. Our family loves yours, and will be thinking of you.
the Winebrenners

Sharon I'm sorry about Ken I missed the visitation. He was a great guy, so sad , yoi and the girls are in my prayers daily. Hugs to and girls 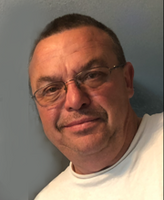