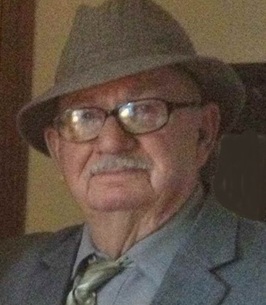 Winford “Blackie” O’Neal Black, 93 of Coldwater passed away Thursday, March 10, 2022 at Masonville Place in Coldwater. A Funeral service will be held Tuesday, March 15, 2022 at 11:00 AM at Dutcher Funeral Home in Coldwater. Interment will follow the service at West Eckford Cemetery in Marshall, MI. The family will receive guests for visitation Monday, March 14, 2022 from 4:00-7:00 PM at the funeral home. For those unable to join the family on Tuesday, services will be live streamed through out website at www.dutcherfh.com.
He was born October 9, 1928 to Silas and Carrie (Abshire) Black in Anitoch, AL. Blackie was a dedicated man that briefly but proudly served his country in the United States Navy. He led a hardworking life as both a long haul truck driver and heavy equipment operator serving the operating engineers union local 324 until his retirement. On May 19, 1979 he married Shirley Goodman, sharing their life and loving family together until her passing on September 18, 2008. Blackie was a man of GOD, he was a member of the Anchor Baptist Church in Homer, MI with his wife Shirley and he held a passion for the outdoors; whether it was lawn work, tinkering in the garage, or wood working Blackie just enjoyed being in his element outside. At times he could be strong-willed, but his family and his dog Bear never knew a day without the love and care he held for them.
Blackie is survived by his daughter Robin (Ernie) Samuel of Norfolk, VA; his grandchildren Candice McCarty, Kenny McCarty Jr.; great grandchildren Shaelyn Newberry, Kendra McCarty, Colton Henley, RaeLynn DeVore; a great-great grandchild Noah Kozak; his loving nieces and nephews including a very close nephew O’Neal Black; his sister-in-law Mary Black of Tenbroeck, AL and a special care-giver Karen Weers.
In addition to his wife Shirley, he was preceded in death by his parents; his sisters Ola Prewett, Lillian Pollard, Mildred Smith, Willie Jean Horton; brothers Oval Black, Dilmus Black, Homer Black, Edward Black, Joseph Black and his adopted son Donald Black.
Memorial donations are suggested to Coldwater ProMedica Hospice.