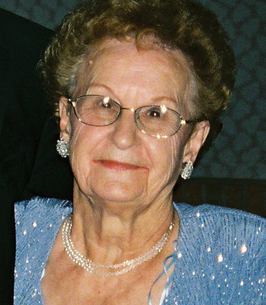 Veronica J. Bohacz, 93, of Sturgis, formerly of Bronson, passed away Sunday, August 21, 2022 at her home.
A Mass of Christian Burial will be held Saturday, August 27, 2022 at 12:00 PM at St. Mary of Assumption Church in Bronson with Rev. Fr. Dan Hyman officiating. Interment will follow at St. Mary’s Cemetery. Visitation will be held Friday, August 26, 2022 from 4-7:00 PM, with the rosary to begin at 7:00 PM, at Dutcher Funeral Home in Bronson.
Veronica was born February 16, 1929 in South Bend, IN to Alexander & Helen (Herman) Cholaj. She married Marion F. Bohacz on February 7, 1948 in Bronson. He preceded her in death on January 22, 2017.
Mrs. Bohacz worked for many years at the Community Health Center of Branch County as a switchboard operator and in admissions, retiring in 1991. She formerly had been a switchboard operator for the telephone company and worked at the Coldwater Sears store and Bronson Plastics.
Veronica was a member of St. Mary’s Church where she belonged to the Ladies Rosary Society and sang in the church choir. She was an avid reader and enjoyed flower gardening, baking and playing Bingo. Veronica was known for her ability to host wonderful parties with great food for family and friends. She treasured most, the time she spent with her family, especially her grand and great grandchildren.
Veronica is survived by her children Gary (Cathy) Bohacz of Bronson, Linda (Ted) Szafranski of Saginaw, Roger (Karla) Bohacz of Bronson, Renee (Scott) Gleeson of Saranac, Bridget (Bob Berlow) Bohacz of Clarksville, MD, Laurie (Bill) O’Dell of Madison, MS, Eric (Candy) Bohacz of Sturgis, daughter-in-law Gloria Vergiels of Carleton; her sister Betty Wallace of Anthony, FL; brother-in-law Tony Rulli of South Bend, IN; 19 grandchildren; many great grandchildren; 1 great, great grandchild; many nieces and nephews and special caregivers Elsie Rehm and Kim Sovine. In addition to her husband she was preceded in death by her sons Michael Bohacz, Gerald Bohacz and several brothers and sisters.
Memorials may be directed to St. Mary’s School. www.dutcherfh.com.