To share your memory on the wall of Sarah Noblit, sign in using one of the following options:

Print
Sarah J. Noblit, 82 of Coldwater passed away Sunday, October 11, 2020 at her home under hospice care, while surrounded by her loving family.

In following her wishes, cremation has taken place and a graveside service will take place at 12... Read More
Sarah J. Noblit, 82 of Coldwater passed away Sunday, October 11, 2020 at her home under hospice care, while surrounded by her loving family.

In following her wishes, cremation has taken place and a graveside service will take place at 12:00 pm on Friday, October 16, 2020 at Oak Grove Cemetery on the North side with Pastor David Holt officiating. The family was cared for by Dutcher Funeral Home.

Sarah worked at Shaw Shoe Factory and Riverside Manufacturing. She left manufacturing and started a long career as a day care provider. Sarah enjoyed being around children, riding motorcycles, and going dancing with Jack. Her true joy in life was spending time with her family.

Sarah is survived by her sons Jack (Brenda) Noblit, Jr., Jeffery (Linda) Noblit, and Joddie Noblit all of Coldwater; her daughters Jacqueline Thryselius of Coldwater, Johnanna (Loren “Fritz”) Frantom of Montgomery, Lorraine Watkins of Coldwater, Jean (William “Wink”) Osborn of Coldwater, and Lisa (Chris) Inman of Angola, IN; her sister Mary Turner of Oklahoma City, OK; her sister-in-law Peggy Vernon of Ocala, FL; 14 grandchildren, many great grandchildren, and one great, great grandson. She was preceded in death by her parents; her husband Jack Noblit, Sr.; her sisters Luella Ledyard and Myrtle (Garnet) Waite; her brothers Homer Draper and Lloyd Draper, Jr.; and her son-in-law Matt Thryselius.

Memorials may be directed to the H. & C. Burnside Center. www.dutcherfh.com
Read Less

Receive notifications about information and event scheduling for Sarah

Consider providing a gift of comfort for the family of Sarah Noblit by sending flowers.

We encourage you to share your most beloved memories of Sarah here, so that the family and other loved ones can always see it. You can upload cherished photographs, or share your favorite stories, and can even comment on those shared by others. 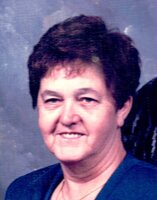