To share your memory on the wall of Robert Simons, sign in using one of the following options:

In following his wishes, cremation has taken place and a graveside service will take place at 1:00 pm on Saturday, Novemb... Read More
Robert “Bob” E. Simons, 93, of Coldwater, passed away Friday, November 13, 2020 at his home under hospice care.

In following his wishes, cremation has taken place and a graveside service will take place at 1:00 pm on Saturday, November 21, 2020 at Evergreen Cemetery in Girard Township. The family was cared for by Dutcher Funeral Home.

Robert was born August 3, 1927 to Elmer and Edna (Isenhower) Simons in Athens. On November 22, 1947 he married the love of his life, Geraldine “Gerrie” Sechler in Union City. She preceded him in death on July 6, 2002. Bob was a hardworking man spending 32 years at the Chevrolet Garage in Union City as a mechanic before taking a mechanic’s position with the City of Coldwater in 1980, retiring in 1993.

Bob enjoyed spending time gardening and caring for his lawn. His garage was his happy place… he absolutely loved working in his garage, tinkering with engines and fixing broken items to make them work once again. He was very mechanical, and he and his wife built their own home in 1955, where they lived for the rest of their lives. Bob was hands on with everything in his life including teaching his children and grandchildren many life skills over the years. He had a soft spot for all animals, especially his grand cat “Mack”. Bob was kind, patient, loyal, and hard-working. His family was the most important thing in the world to him. He will be remembered for his “heart of gold” and always being busy. Bob was a long time Tigers fan. He will be dearly missed by those who knew him.

Mr. Simons is survived by his beloved daughter Judy (James “Jim”) Evans of Coldwater; his sister Dorothy Stephenson of Coldwater; his sister-in-law Shirley Sechler of Girard; his grandchildren Michael “Mike” (Lisa) Evans of Coldwater , Michelle “Chelley” (Chad) Thelen of Three Rivers, and Marianne Evans of Grand Rapids; his great-grandchildren Caterina Thelen, Anastasia Thelen, Naomi Moore, Luci Evans, and Codin Ayerdi; and many nieces & nephews; and his next door neighbors that were like a second family, William “Butch” and Violet “Vi” Wilber. He was preceded in death by his parents; his wife of 54 years, Gerrie Simons; his brothers Melvin, Conway, Kenneth, and Donald Simons; his sister Clelah Toby; and his good friend Lucille Wilber.

Consider providing a gift of comfort for the family of Robert Simons by sending flowers. 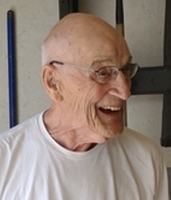