To share your memory on the wall of John Odren, sign in using one of the following options:

A memorial service will be held at a later date. A private burial at Oak Grove Cemetery with Military Honors will take place. Cremation services have b... Read More
John E. Odren, 90, of Quincy, passed away Wednesday, September 30, 2020 at his home.

A memorial service will be held at a later date. A private burial at Oak Grove Cemetery with Military Honors will take place. Cremation services have been provided by Dutcher Funeral Home.

John was born May 24, 1930 to Lavern and Ruth (Snyder) Odren in Coldwater. He proudly served in the US Air Force. John was stationed in England when he met and married Beryl J. Janes on January 21, 1954 in High Wycombe, Bucks, UK. She preceded him in death on May 13, 2020. He earned his business degree from Tri-State College (now Trine University) before beginning a long career as a businessman. He purchased the old Mobile Gas station in downtown Coldwater and had multiple other business ventures ultimately ending with Odren Wrecker Service, retiring in 1992.

John had many interests including flying, golfing, sailing, ice sailing, and mainly puttering. He was always on the go doing something or helping someone out with a project or need. John was very fond of his Old English Sheepdogs. He will be remembered for his consistency in life and being very organized. John’s true joy in life was spending time with his family, especially his grandchildren passing down learning moments and attending as many events as possible.

Mr. Odren is survived by his sons David Odren (Gerardo Garcia) of Chicago, IL, and Michael (Kathie) Odren of Coldwater; his grandchildren Elizabeth (Cameron) Long of Fort Wayne, IN, Amanda Odren of Novato, CA, and Jonathan Odren of Coldwater; and his great grandchildren Julia & Benjamin Long. He was preceded in death by his parents; his wife Beryl; his infant brother James Odren; and his sister Joan Dorris.

Receive notifications about information and event scheduling for John

Print
A memorial service will be held at a later date for John & Beryl.

Consider providing a gift of comfort for the family of John Odren by sending flowers.

Posted Oct 07, 2020 at 06:22pm
Thanks be to God for a long life, beautiful memories, and the wonderful values that have taken root in the generations that follow John. Peace! 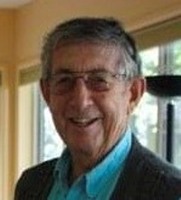