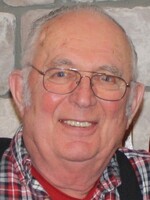 David L. Ross, Sr., better known as “Larry” passed away peacefully on Sat. Jan. 30th, 2021. Larry was born on Tue. April 23rd, 1940 in Detroit, Michigan; the son, of David and Elizabeth Ross. He was married for 56 years to the love of his life, Patricia. Larry has four children and eight grandchildren who he adored and cherished deeply. He enjoyed spending time with his family; camping, fishing and being outdoors. Larry was first and foremost an amazing father, family man, and wise advice giver. He had a way of making you feel better with his sayings; tomorrow is another day and, it’s a long way from your heart. Larry was that one in a million guy that you’ll never forget. He touched the lives of many, making friends easily with his positive and friendly demeanor. He was a kind man who would help anyone who needed it without asking for anything in return. Larry was a proud veteran who served with the United States Army for 4 years. He was a member of The Quincy American Legion and St. Charles Church. He was a mechanic by profession and a farmer by heart. He had a strong work ethic and a zest for life. Larry is survived by his children: Patty (Mitch) Brock of Coldwater, David (Jessica) Ross Jr. of Notre Dame, IN, Michael (Christina) Ross of Jenison and Aileen Waldron of Alma. Beloved grandchildren: Samantha Brock and Joshua (Kaitlyn) Brock, Sara and David Ross, III, Ian and Nathan Ross, Olivia Waldron and Vanessa (Jake) Nelson. Larry is also survived by his sister, Lore Ross Rule. He was preceded in death by his parents, his wife Patricia and his sister Dr. Diane Ross. It was a true blessing to have known him. He will be greatly missed by many. Memorials in his name may be directed to The Quincy American Legion or The Wounded Warriors Project. A private family service will be held. Arrangements cared for by Dutcher Funeral Home. www.dutcherfh.com